Required cookies are essential to let you move around the website and use its features, such as accessing secure areas, shopping baskets and online billing. These cookies allow our website to provide services at your request.

Functionality cookies are used to remember the choices you make, e.g. your user name, log in details and language preferences. They also remember any customisations you make to the website to give you enhanced, more personal features.

Targeting cookies collect information about your browsing habits to deliver adverts which are more relevant to you and your interests. They also measure the effectiveness of advertising campaigns.

This site uses cookies and related technologies for site operation, analytics and third party advertising purposes as described in our Privacy and Data Processing Policy. You may choose to consent to our use of these technologies, or further manage your preferences. To opt-out of sharing with third parties information related to these technologies, select "Manage Settings" or submit a Do Not Sell My Personal Information request.

The KB300's important figures are 130kW/380Nm from 1800-2800rpm, mated to a five-speed manual gearbox. It's fitted with 4WD Rotary Switch Control with a 2-speed transfer case. There's a rear-differential lock button below the facia, while modes can be shifted on the fly at speeds of up to 100km/h by toggling the switch along the gear lever. Combined fuel consumption is rated at a claimed 7.9-litres/100km from its 80-litre fuel tank. Usually fuel figures are always debatable and depends on driving style but the KB300 is rather fuel efficient.

Niceties include integrated LED Daytime Running Lights, a rearview camera, 18" alloys, keyless entry, leather seats and a touch-screen radio with navigation, mated with Bluetooth audio streaming capability. Once you've connected your phone to the car's Bluetooth, it stays connected even when you turn off the vehicle and start it up again.

It has a gear-shifter on the instrument cluster, an engine sop/start button. Other safety features include electronic stability control (ESC), with elements like brake assist, traction control, electronic brake-force distribution and anti-lock braking systems. The LX double cab is fitted with six airbags. 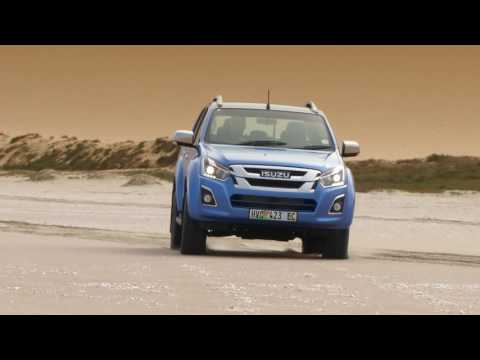